Deciding that since Da Hong Pao was about the greatest thing since loose leaf tea, I really ought to try some other of Wuyi Mountain's famous "yan cha" (cliff/rock teas, 武夷山岩茶). I came cross this tea from The Chinese Tea Shop and was drawn not only to its name but also its description.

Tie Luohan is one of the four most famous yan cha. It's name literally means "Iron Arhat" (an Arhat is an "enlightened monk", for lack of a better simple explanation), or "Iron Warrior Monk". According to legend (and Wiki...), "this tea was created by a powerful warrior monk with golden-bronze skin, hence the name Tie Luohan."

It's been aged at least twenty years, though likely much longer. Daniel received it from an old man who ran a small grocery store. He added that many experienced tea drinkers have said that its character seems much older, reminiscent of even a 1960's oolong. Having not tasted this tea before, I have no personal reference point, but the aging process is said to have mellowed out its usually bitter nature and contributed a "medicinal" flavour.

The packaging for this tea is nice. A protective tin case with a print of Wuyi Mountain with the tea individually wrapped in twelve 5g paper squares, also with an Wuyi print. The colour scheme, design, and quality of the print look very 70's, another hint at a possibly older tea, but it could just mean they didn't update their design, too. My daughter liked the packaging so much that she immediately claimed the tea as hers.

Unwrapping one of the packs revealed a nice bundle of twisted, dark, reddish-brown leaves. Tie Luohan is usual described as having deep green leaves, so I take this as another sign of it's age. A rich, sweet aroma rose from the paper. The first steep produced a rich, dark, but clear orange liqueur. The taste was much like the smell; rich and sweet with a soft herbal aftertaste. In traditional Chinese medicine, herbal and medicinal are basically synonymous, so its "medicinal" description made sense. After my daughter slowly gulped her full cup, her eyes opened wide and she exclaimed, "Mmm, tastes like chocolate." It does have a similar quality to the richness of cocoa, but much sweeter.

The first few steeps were consistent, building a strong, sweet, herbal aftertaste. After the fifth steep, the flavour, as well as the deep orange colour lightened. Where the initial colour reminded me of the color of roast-squash, I found the final few steeps had a faint taste of squash, though I wonder if this could be the power of suggestion.

All in all, this is one of the most interesting teas I've had. It's "cha-qi" imparted a pleasant, mellow glow through my body, true to the replenishing "yan yun" (energy-giving) reputation of Wuyi yancha. The only thing that left me wondering about this tea was whether or not I should spread the word in case there won't be any left when I'm ready to order more!

Given the name and character of this tea, I thought my bronze Medicine Buddha would be a good companion!

With my first order from The Chinese Tea Shop, Daniel included a sample of Phoenix Dan Cong "flower" flavour. It was much like the lightly fermented Phoenix Dan Cong from Kkik Da Geo, but the leaves looked slightly more brilliant. Bursts of yellow and red in the long, twisted leaves made them seem other-worldly, perhaps grown in the garden of the Jade Palace, where a Phoenix makes its nest.

The rinsed leaves became even more radiant, aflame with vivid hues radiating from the pot. As I continued through each steep, I couldn't resisting admiring the leaves before replacing the lid, possible negatively affect the infusion.

The session turned into an outright marathon with these nutrient-packed leaves. It started off as expected, building an elegant, floral, slightly bitter flavour over the first few infusions until by the fourth, a thick, salty after-taste, characteristic of Phoenix Dan Cong, had build in the back of the throat. After the fifth cup, there was an expected decline in intensity but instead of fading like a cloud of smoke over the next couple of steeps, it kept smoldering on and on until nearly two hours later, after the sixteenth infusion, there was no more room in my belly (or my bladder) for anymore and little left to be extracted from the leaves, even if I weren't about to burst.

The final treat was examining the leaves. I'd never seen leaves like them. Psychedelic-jelly leaves or down feathers left by the departed Phoenix as it fled back to paradise?

Unfortunately, this particular Dan Cong is out of stock at The Chinese Tea Shop, but I'll certainly be trying his others in future orders, and if this one returns, it will be on my list, as well!

It was a long time before my tea-making skills even began to match that of the folk at Kkik Da Geo. I still have a long way to go but I remember the excitement I felt when I was first able to get eight nice tasting infusions from a single pot, getting passed four was a huge step. Or even getting one great tasting cup, I used to exclaim to my wife, "It tastes like Kkik Da Geo!"

With the taste of my earlier tea still lingering in my mouth, I couldn't wait to sip Mr Ahn's to confirm how similar my technique had become. My arrogance was quickly squashed as I raised the the first cup to my mouth, failing to observe the color and smell and took a sip of tea that that was absolutely nothing, NOTHING like my own.

This lighter one is said to have an "orchid" fragrance. My first impression was that it tastes like what I'd imagine a lotus flower would [but doesn't] taste. It eventually conjured strong memories of the Tiger Lilies that grow on Lower Mill Road, where I grew up. Having since had green tea that was mixed with orchid blossoms, this tea does have a remarkable orchid flavour.

Mr Ahn recommended filling the pot very full, about 50%, with the young leaves and using cooler water than usual, around 70°C. I've had a poor success rate with this tea, on my own. I tend to land either on the bland or harsh side of the complex, floral textures of the tea Mr Ahn severed, confirming that I do indeed still need much practice! 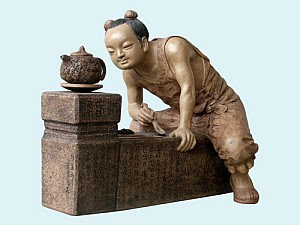 Pottery in the Yixing area has been produced for thousands of years, but it wasn't until the early 16th Century that the birth of Yixing pots, as we know them today, took place.

A monk from Jinsha-si, the Golden Sand Temple, just outside of Yixing, who had studied with a local potter began producing fine quality teapots with the zisha clay. His name has been lost with the golden sands of time but a name that is still remembered well is Gong Chun, a young servant of a scholar who'd come to Jinsha Temple to study for the Imperial examination.

Gong Chun spent his free time with the monk, learning to make pots. With some zisha clay, he went out and modeled a teapot after the texture and form of a burl in an old Ginkgo tree growing on the temple grounds. Pressing his thumb into the bottom of the pot, marking it his own, he began a long tradition of Yixing masters.

Eventually, his master freed him to dedicate his life to potting. Tea was a popular commodity amongst the upper-classes and at the time of Gong Chun, tastes were shifting from extravagant to elegant simplicity. Also, the Emperor had recently declared that tribute tea must no longer be in bricks that were to be ground, but as loose leaves. Gong Chun's style fit perfectly into this new trend and his master quickly spread the word of Gong Chun and his pots, making his work highly sought after. Gong Chun and his master also recognized the superior quality of the porous zisha clay for brewing loose-leaf tea.

He was a great innovator of Yixing pottery, creating his own tools. He also designed as several unique styles of pots, many derived from nature, including the "Dragon Egg", "Square Seal", and the "Burl" teapot, now better known as the "Gong Chun" teapot. There is only one remaining pot in the world that is quite certain to be his, on display at the National Museum of China. Unfortunately, the lid was "lost" during the war, but a convincing replica was make to replace it. Since shortly after his time there has been a constant line of potters imitating his work, keeping his creations and his spirit alive.

In previous posts, I referred to the artist as Jin To Geun. I've since learned that is the Korean pronunciation of his name. Chen Tu Gen is more accurate to his Chinese name.

Sometimes desire creeps in slowly. I see a teapot, it's looks nice, I leave then the thought of the pot circles my thoughts until I "must" have it. This pot was different. From the moment it was shown to me, I wanted it, more than I'd ever wanted any other teapot.

Though I'd been on the looking out for a "stump" teapot (this one is more of a "branch") it was really the heart-shaped spout that I found the most appealing, but the peach is also one of the "Ten Symbols of Longevity" (12th on the list, don't ask...). It's a popular motif on many temple murals; A Daoist immortal accompanied by a couple of his little attendants, one of whom is lugging a giant peach for the master.

The pot is authentic Yixing zisha. The walls are so thin that when I pinched them to check the thickness, I was almost afraid that my finger would punch through, like on the paper windows on traditional latticed doors. Of course, I knew that it wouldn't, but it's just a testament to how amazingly thin the pot is. Unfortunately, the peach-branch design also means that the pot's thickness is not fully even, which affects the distribution of heat, in turn affecting the tea, but it's a minimal drawback, far outweighed by its beauty.

The wide spout allows for a very quick, clean pour, just a few seconds, which can make a good difference when using a larger pot. The lid fits perfectly in place and has a nice groove to keep the design in line. It fits so well that I've actually had a difficult time removing it after rinsing from the tight seal that forms. For some reason, after rising it hasn't been a problem. As I become more familiar with it, perhaps I'll figure something out.

The color of the clay is light purplish-brown. The specks of larger grain give it a slightly pink tone. At first, I commented that I preferred the even color of the other pots he made but Mr Ahn's description of the clay was that, "It's like the Milky Way in the night sky." After hearing it put that eloquently, I was willing to change my mind's eye... and admit that I have a lot to learn before I can call myself a tea master!

This zisha one was a promotional model, but there are several smaller (approx. 100-120ml) ones made from authentic zhuni available at >Kkik Da Geo<. The zhuni pots are exceptionally good for puer. Anyway, I'll let the photos do the rest of the talking. Any questions, I will gladly answer in the comments.